a SUPER holds a passport
but never has to show it

a SUPER dominates it's space
and never dresses in soiled feather

a SUPER is active
and never loses motivation

Widowhood Flying For Over 100 Years

J. Janssen submitted an article for SQUILLS in 1902, and admitted to trying the widowhood system.
"In Liege a great number of fanciers do not mate the birds at all intended for long-distance races; others let them rear a single young one, and then remove the hen from the loft, so that during the whole of the flying season the cocks are alone. I have tried this system, but must confess I did not find it successful."
TCC Loft - Racing Pigeons - Mike Taylor
Posted by Mike Taylor at 12:16 PM

Most fanciers make their final decisions on which birds they will keep over the winter by the end of November. Usually driven by a certain number, it's always a huge relief to be completed this balancing task. However, is your final selection complete? Last weekend a new comer commented on how some of his birds were getting fat, while others were maintaining their weight, and a few were actually losing weight. Flyer's located in Canada have an extra HEALTH BAROMETER available to them when temperatures are a constant -10 degrees Celsius. This is the healthiest time of the year for "the Canadian loft". Why do we want to keep birds that are looking poorly or losing weight. If all the birds are being fed the same and your health program includes de-worming, then they should all look robust and ready for the race pannier! Don't feed sick birds all winter, and then lose them in the first couple of races, or worse, breed more of them. Keep your eyes open in January and February, and don't hesitate removing these unhealthy birds! If you want to maintain SUPER HEALTH within the loft, this is not a difficult decision. Don't balance the sexes by keeping unfit pigeons.
TCC Loft - Racing Pigeons - Mike Taylor
Posted by Mike Taylor at 7:05 PM 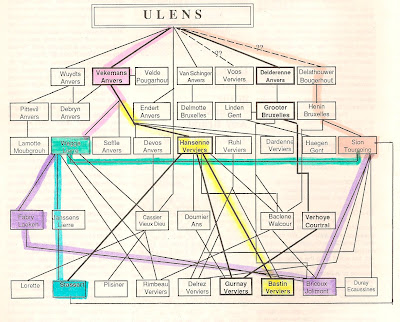 Salvatore Ferra and I were discussing different pigeon family origins today, and we thought this may be a useful guide for those that have not seen this chart. Published in the Racing Pigeon Bulletin, September 26, 1988. "Dear Editor, In the August 8th issue of the RPB, Rev. Bader ponders the origin of the Soffle strain. In order to keep the readers of the RPB and News, the most knowledgeable in America, I would like to share with the fancy the enclosed chart that I received from good freind in Arizona, Jerry Leavenworth. I personally vouch for its authenticity and invite the readership to enjoy this heretofore "secret" of the AMDG Racing Loft as we employ it in breeding to type. As you can see, it is a definite reference chart indicating the proximity and relationship to one another families. I would ask you to reproduce for the readership and then return it to me as I cannot copy it due to its large size. Respectfully, Cactus Jack Voita"
Posted by Mike Taylor at 9:24 PM

Ulens as described by Dr W Anderson in his book "The Sport of Pigeon Racing"
"This appears to be the oldest recognised strain in the historical record. It is said to be founded on crossing the Antwerp with the Persian Carrier and the Cumulet with the Smyter (farmyard pigeon). At all events we know M. Ulens was an outstanding fancier and was memorable in his day in races from all distances organised in his region - Antwerp.
He was not a great believer in loft hygiene, if the names of his best pigeons are any criterion - the "Rotten Ulens". These birds were often suffering from wet eyes, discharging wattles, etc., and many fanciers objected to their birds travelling in the same panniers. Still, with such disadvantages, his birds had always to be reckoned with (I got much of this information from M. Janssens and M. Stassart). His birds went to make the Vekeman family. M. Vekeman purchased them in 1889 at Ulens dispersal sale.
The Ulens blood must exist in a large number of lofts because at Vekeman's sale many of his birds went to such distinguished fanciers as Hansenne, Wegge, and Grooters.
M. Vekeman seems to have been a collector of racing pigeons rather than a fancier who was interested in the racing side of the sport. Like many others, he owed much of his success to his loftman, M. Beernaerts, who was a very good fancier. This old loftman had also an ancient family of pigeons which mould well with the Ulens.
Among many distinguished fanciers who did well with the blood were M. Pittevil, M. Salsmans, M. Dardenne, M. Ruhl, M. Carpentier, etc. With regard to the colour, it is interesting to note many silvers and silver Cheqs. were present, also mealies and red cheqs. The eye was often pearl and the head was well developed.
The birds were medium size or under and were usually well feathered with rich silky feathers. The Ulens blood is known to have had an affinity with the Wegges, Grooters, and Van Schingens."
TCC Lofts - Racing Pigeons - Mike Taylor
Posted by Mike Taylor at 7:27 PM

301's pedigree can be traced back to Heitzman's "H" pair bred by Lewis Curtis, and is direct son of "Hei-Choice". A gift from Tony Paszterko to Mike Taylor, this cock bird lived into it's 25th year. 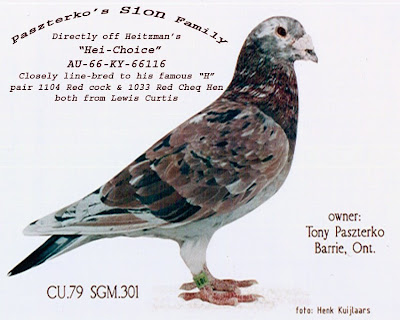 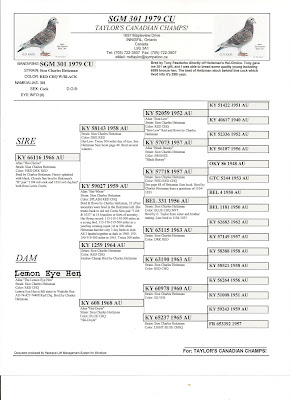 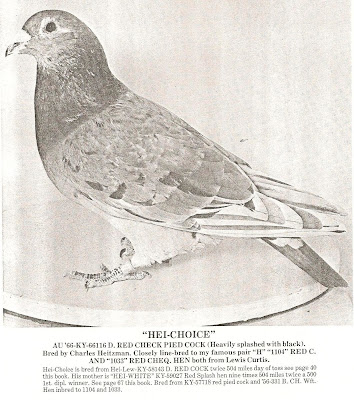 1029 is Grand Son of Heitzman's "Hei-Choice", Bred by Tony Paszterko and another "SUPER" gift to Mike Taylor. 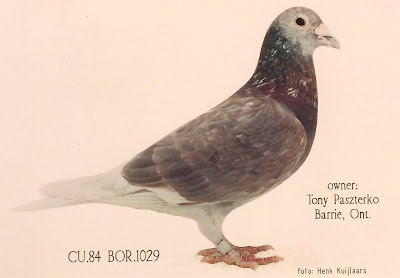 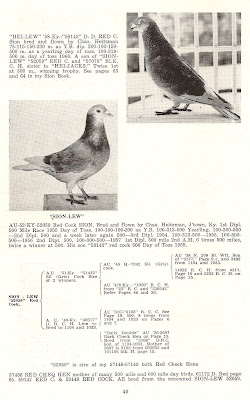 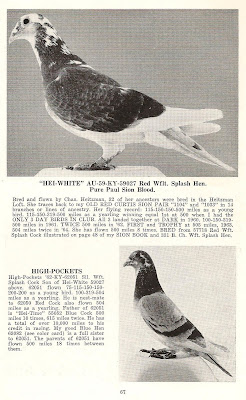 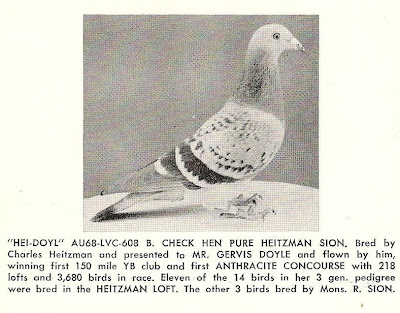