Breeding for stock, breed as close as you can. Breeding for racing go as far as you can.
Taken from Widowhood Flying
by Mark Gordon
Twenty words or less TCC Loft series
Posted by Mike Taylor at 12:00 PM 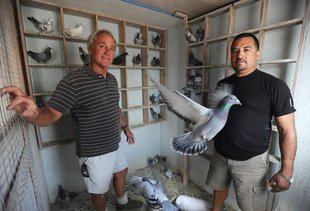 McClatchy photo
Martinez Homing Pigeon Club members Hans Foell, left, and Juan Soto stand with some of their birds inside a loft in Concord, Calif.

WALNUT CREEK, Calif. — Hans Foell spends race days pacing his Concord, Calif., backyard, squinting up Kirker Pass as he waits for one of his prizewinning birds to come into view.
Foell’s brother gave him his first homing pigeon when he was 5. He speaks passionately about his pedigreed fleet and dismisses common pigeons as “street rats.”
But the birds may not be coming over the pass much longer — blown off course by changing cultural currents, this esoteric pastime is in decline.
The “thoroughbreds of the sky” are remnants of a time when children spent afternoons on rooftops and in barnyards, sons learned the sport at their fathers’ sides, and even toughs such as Marlon Brando’s character, Terry Malloy, in the 1954 film “On the Waterfront” sought solace in feathered companionship.
Oakley, Calif., resident Wes Askins, who won his first pigeon race at age 14 and now hosts a weekly pigeon-themed show on www.pigeonradio.com, remembers those days well.
“We didn’t have computers or video games,” Askins, 56, said. “Pigeons were all we had — or trouble.”
When Askins and Foell were growing up, the Martinez Homing Pigeon Club had dozens of “junior members.” Today, the youngest fanciers in the almost century-old club are in their 30s. Old-timers say it is too difficult to interest over-scheduled youths in a sport that requires several hours of solitary labor every day to compete in, let alone win.
Fanciers must be trainers, vets, parents and friends to their birds. The most successful trainers rise before daylight to sweep cages, administer vitamins and exercise the small athletes. Many have spent sleepless nights waiting for lost birds to return.
“You have to be there every day,” said Lee Schneider, treasurer for the Bay Cities Combine, the Bay Area’s umbrella pigeon-racing organization. “You can’t ever close the door and leave for the weekend.”
Zoning ordinances and urbanization have driven fanciers to the more rural corners of the region, and the increasing costs of feed and medicine have driven away some from the sport.
Combined membership has dropped by one-third since World War II to 200 members, even as the area the organization covers has expanded. Nationwide, the number of pigeon fanciers has plunged to 20,000 from a peak of 100,000, according to the International Federation of American Homing Pigeon Fanciers.
Membership would have fallen even more dramatically if not for an influx of immigrants who grew up with racing pigeons in their native countries, Schneider said.
Vincente Saro, of Byron, Calif., is one of several younger Martinez club members who raced birds as a child in Mexico. His pigeon, El Gordo, recently won a 250-mile race.
“It’s a beautiful thing because it fills you with pride,” he said in Spanish.
But it saddens Saro that his American-raised sons have failed to take up his hobby.
“There’s no way to teach a child the joy of flying pigeons,” he said.
Read more ...
The Wenatchee World
Posted by Mike Taylor at 4:00 AM

Graders such as Piet de Weerd pay more attention to the muscles on a pigeon than any other aspect of its confirmation.
Taken from Widowhood Flying
by Mark Gordon
Twenty words or less TCC Loft series
Posted by Mike Taylor at 12:00 PM

Don't invite Tom, Dick and Harry to visit your loft after they have just left another.
Taken from The Ailments & Diseases of The Racing Pigeon
by Old Hand
Twenty words or less TCC Loft series
Posted by Mike Taylor at 4:00 AM

The ideal loft, in my opinion, does not have a flat roof but a peaked one, so that a ceiling can be built and there is an air space between it and the roof. It should face south or south-west, have plenty of windows, which can be opened or shut easily. But most important, it should have a ventilating system. There are many variations, but the ideal one has a louvered ventilator or opening of some sort in the front of each compartment at or near floor level. This is where the fresh air enters. If there is an opening on the back wall it will create a draft. Many lofts have such an opening above their perches and they wonder why, on cold damp days after nice warm weather, their birds come down, with colds and other illnesses. But the fresh air must rise and leave the loft to work properly. Therefore there should be ventilators in the roof.
In the loft, pigeons should be kept on the back wall, either in nests or on perches. The back half of the ceiling should be solid and usually is constructed of plywood. The front half should be of dowels or narrow slats. Now the fresh air can enter the loft on the coldest day when the windows are shut. It gradually rises and as it cannot get out behind the birds or above them, it moves to the front of the loft and goes out the roof ventilators as newer fresher air enters the lower ventilator.
Taken from Widowhood Flying
by Mark Gordon
Posted by Mike Taylor at 4:00 AM

Abbie Thomas
ABC Science
Wednesday, 13 October 2010
Some gamblers like to forgo their winnings for the chance of a much bigger win - and it seems pigeons like to take the same risk.
Research by Thomas Zentall and Jessica Stagner from the University of Kentucky shows pigeons prefer an all-or-nothing outcome than the guarantee of a much smaller reward. Feeling lucky pigeon? Research suggests pigeons, like humans, would rather play for a bigger outcome (Source: STR New/REUTERS)
The researchers say this runs contrary to optimal foraging theory, which says animals evolve to make the most rational choices possible to guarantee their survival.
Instead, it seems pigeons behave more like human gamblers, risking everything for the small chance of a big return.
In the experiment, which appears today in Proceedings of the Royal Society B, eight pigeons were taught the outcomes of two different sequences if they pecked either a vertical or a horizontal line on a screen.
They learned that if they chose the vertical line, they had a 20% chance of a big food reward (10 pellets), or an 80% chance of no reward at all (0 pellets). If they chose the horizontal line, they had a guaranteed reward of three pellets - effectively a non-gambling option.
When the pigeons were then presented with the choice of pecking either vertical or horizontal lines, to the surprise of the researchers, most chose the vertical line despite the fact that it gave them less food overall.
Averaged over many trials, six of the eight pigeons made choices that gave them an average of two food pellets over an alternative three.
"This choice behaviour mimics human monetary gambling in which the infrequent occurrence of a stimulus signalling the winning event is overemphasised and the more frequent occurrence of a stimulus signalling the losing event is underemphasised," the researchers write.
In other words, we only remember our wins, not our losses.
Lifestyle consequence
Commenting on the research, Dr K-lynn Smith who is a behavioural biologist in the School of Biology at Macquarie University says the results are interesting because they contradict accepted theory.
"Animals are supposed to make rational decisions," says Smith. "An animal would normally think 'what's the easiest way to answer this question?' or 'what's the fastest way to get the food'? - that's why these results are so surprising.
"What we're seeing here is the concept of a jackpot - you have a very positive feeling when you suddenly get a huge amount of food and you remember that very well, whereas when you lose and you didn't get what you want, you discount that."
Smith believes the pigeon's behaviour may have something to do with their lifestyle.
"Pigeons spend their time looking for seeds or trees that are blooming. These are patchy food sources where there might be a big win if you hit the right patch," she says.
"So it could be that they are being driven to find the big rewards where there could be a huge amount that will pay off and feed you all at one time, rather than staying on a food source where there is very little [reward].
"It could also be that the pigeons in the experiment weren't that hungry. They knew they were always going to get back to their cage to get food. So it's possible that they didn't need this reward as much - it wasn't a life and death situation.
Either way, Smith says it raises some interesting questions.
"Perhaps it tells us the reward system in pigeons is more similar to humans
Read more ...
ABC Science
Posted by Mike Taylor at 4:00 AM