Response to a question posted on the new Canadian Racing Pigeon Union Forum site
http://www.crpu.ca/
Re: Dawson Creek, BC Sport Promotions
by Voyo Radoman » Mon Feb 22, 2010 12:58 pm
Hello Mike Taylor
Great question, and if I may say, nice to CU on BOARD. HaHa.
Let me start by saying the CU Convention in Calgary was a great success. The CU meeting was eventful. There was great discussion on promotion, with much participation from the members, particularly when Mr. Lance Jones stood and asked if he could discuss the Rotary Club event hosted annually in Dawson Creek. He had contacted the CU earlier in the year, asking if he could present his powerpoint presentation at the CU Convention. It is unfortunate that he did not contact myself (as promotion director), or that the message had not been forwarded to myself.
I asked Lance if he would come to the head of the table and take the floor. He was pleased to tell of the successful community promotional event. From the moment he took the floor, he had his audience captivated, and wanting to discuss the promotional idea further, which continued even after the meeting was over. To answer your question, Lance Jones had brought his idea to the Rotary Club of Dawson Creek. The idea sounded just crazy enough that they thought it would work. It worked so well that it replaced their Casino night fund raiser and raised double the funds.
This is how it works. Local businesses sponsor a bird for $300. In the first year 50 birds were sponsored and only 76 people showed for the Rotary Pigeon Race banquet. In 2009, 81 birds were sponsored and the banquet was full to capacity. The event raised approximately $45,000 for the community and provided 4 weeks of racing pigeon entertainment. The racing itself consists of 4 races, flown from Lance Jones' loft. These birds are released with Lance's club, but calculated separately for the Rotary club The growing popularity of the event has stemmed many rivalries throughout the community, not so much about who comes in first, but whose business team beats the other (car dealer vs car dealer...) It also has created positive awareness of our hobby, and given back to the community, so much so that the Mayor has spoken of it and the local paper (Dawson Creek - Daily News.) has given it front page coverage, and The Mirror has printed full results of the race series.
Perhaps we can ask Lance if he would be willing to give us his powerpoint presentation at this year's CU Convention. We could all learn so much about promoting our sport, and realizing that the sky is the limit. Crazy ideas can sometimes do alot more than we think. Let's learn to "Think outside the box". Hats of to Lance and his team.
Voyo RadomanPromotions Director Canadian Racing Pigeon Union
Posted by Mike Taylor at 3:58 PM

I received this flyer in snail-mail today. Website information on bottom of flyer hard to read. Link for further information: www.wecrpa.webs.com

The Canadian Racing Pigeon Union - CRPU has created a Forum on their website. We now have a communication tool for all Canadian racing pigeon fanciers. What a powerful voice, if we could get all CRPU Members to register. Please visit the site today and register.
http://www.crpu.ca/
This morning I posted a question to a director. All questions sent to the directors must be approved prior to posting (which I agree with), in case it is already in front of the board. I'm sure this posting will be available shortly.
Good morning Voyo,
At the last CU convention, a gentleman from Dawson Creek, BC presented a Rotary Club fundraiser package to you. I goggled, and only found a few pictures on the Rotary Club site. However, it does not describe the event, nor it's results. Can you forward this information, so I can post it on my TCC Loft blog site? Or better yet, post on the CU site. If this annual event is successful in their local Rotary Club, and the local pigeon racing club, should we not take a closer look at this program?
Thanks, Mike Taylor - TCC Loft
Posted by Mike Taylor at 8:59 AM

Very shortly this blog will be supported by a new website being created by Zachariah Radoman. Zach has produced some impressive Racing Pigeon Sites including; Stonehedge Lofts, Tony Alves/Ganus, and Horner Family Lofts. I'm really looking forward to his design. If you require a Web Designer that knows the sport, Zach can be reached on the linked email below.
zachariah.radoman@castironweb.com
New TCC Loft Website Link
http://www.tccloft.com/
Posted by Mike Taylor at 2:24 PM

It could be Mice

I heard a local loft was experiencing typical Salmonella/Paratyphoid symptoms; Torsion of the neck, Diarrhoea, Fever, Shaking, and of course loss of life. This fancier thought his health woos were from participating in winter shows. Although possible, I think the cause is closer to home. It could be contaminated grain, or most likely MICE nesting and feeding in the loft.
My home and loft are surrounded by farm land, and I've always had to manage rodents on our property. Over the years, I've used cheap and expensive traps and gadgets. However, today I use the same system that Bill Sheridan shared with me five years ago. A Simple, Cheap, and Effective way to control mice in and around your loft.
A shoe box with small entrance holes, filled with your favourite bate blocks. These shoe boxes are secured with duct tape and placed in the loft away from the pigeons, and other pets and animals. 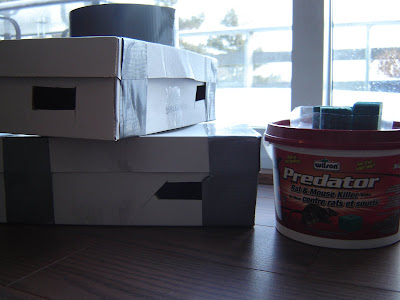 Rats and mice usually only feed a few metres/yards from their nest, and they're closer then you think. Is it time to clean out the loft?
I don't mean scraping...Most pigeon fanciers are pack rats (No pun intended). We save old drinkers, nest fronts, bowls, and bowl pads. There's usually a half-dozen almost empty feed bags, maybe a couple of dozen empty bags. The shelves are filled with outdated medications, and ultimately we've created a loft full of hiding spots for our uninvited quests.
Maybe these health woos are caused by something more sinister. However, it won't hurt to clean out the corridors, and throw out those unnecessary treasures.
Posted by Mike Taylor at 6:52 PM